1. What did you do in 2008 that you’d never done before?
Flew first class.  Missed a plane.  (Different trips.)  Got a raise for more than fifty cents.

2. Did you keep your New Year’s resolutions, and will you make more for next year?
My New Year’s resolutions were to try more new foods and to stop kissing random boys for sport.  Trying new foods (and wines) was not easy on my stomach so I cut myself a break there, but I think I cut my random boy-kissing down by about eighty-eight percent.  I’m resolving again in 2009.

3. Did anyone close to you give birth?
No.  Nobody gave birth while close to me either, which is an even greater relief.

4. Did anyone close to you die?
No, not this year.

5. What countries did you visit?
Texas, USA.

6. What would you like to have in 2009 that you lacked in 2008?
Whatever it is that some people have that allows things to roll of their backs. New lightbulbs in the hallway.

7. What dates from 2008 will remain etched upon your memory, and why?
February 24: A randomly recalled brunch with Rachel
July 5: Jill called to tell me that Kevin had officially proposed and I was officially her maid of honor
July 28: First day back at work after my family vacation
November 5: Barack Obama Day
December 3: Black Wednesday in the book publishing business

8. What was your biggest achievement of the year?
Every time I made someone laugh.

9. What was your biggest failure?
Dropping the ball on a lot of social engagements (missed opportunities to make someone laugh!)

11. What was the best thing you bought?
The tree print I got at IKEA. It may be vague, mass-produced art, but it’s my art.

12. Whose behavior merited celebration?
The members of the ASPCA and other organizations who lobbied to protect, shelter, and rehabilitate the pit bulls rescued from Michael Vick’s property in 2007 when not even PETA thought the dogs would stand a chance.

13. Whose behavior made you appalled and depressed?
People who abuse the little red “urgent” exclamation mark on their e-mails.

16. What song will always remind you of 2008?
Say by John Mayer and Bleeding Love.  And I guess Paper Planes because I think M.I.A.’s licensors wanted it to be the song that always reminds everybody of 2008.

18. What do you wish you’d done more of?
Weight training. Writing.  Picture-taking.

19. What do you wish you’d done less of?
I wish I hadn’t spent so many Saturdays and Sundays pacing in my apartment because I couldn’t  decide where I’d go or what I’d do once I left it.

20. How did you spend Christmas?
At home with my parents, my brother, and my dog.  I slept until my mom woke me up with breakfast and I think I finally got used to the fact that my brother and I are the last ones downstairs on Christmas morning instead of the first.

21. Did you fall in love in 2008?
For me, falling in love is both a masochistic hobby and a guilty pleasure.  Just like falling out of love.  I did both.

22. What was your favorite TV program?
Law and Order: Special Victims Unit.

23. Do you hate anyone now that you didn’t hate this time last year?
No; I think I hate pretty much the same cast of characters this year as I did last year.

24. What was the best book you read?
The Two Kinds of Decay by Sarah Manguso.

25. What was your greatest musical discovery?
I heard a lot of new music on So You Think You Can Dance over the summer, like Charlotte Martin’s cover of Just Like Heaven.

26. What did you want and get?
A new digital camera.  A bottle of Jo Malone’s Blue Agava and Cacao perfume.  To visit Camp Jewell with the Liftman sisters.  To see the rainbow in San Antonio.  To meet Mariska Hargitay.

27. What did you want and not get?
Peace of mind.  Aviator sunglasses with purple lenses.

28. What was your favorite film of this year?
WALL·E.

29. What did you do on your birthday, and how old were you?
Cupcakes. To celebrate turning twenty-four, I invited friends of all genres to Clandestino for drinks on the Thursday before my birthday and ate more cupcakes than I drank beer.

30. What one thing would have made your year immeasurably more satisfying?
A private turn-down service at my apartment.  Firefox compatibility on my PC at work.

31. How would you describe your personal fashion concept in 2008?
“I bought this without trying it on because I can’t tolerate waiting in line for a fitting room” chic or “Wouldn’t this look awesome with a scarf or a pin or a necklace?  Too bad I never leave enough time to accessorize in the AM” chic.

32. What kept you sane?
Flavored carbonated water. Talia. My iPod.  My roommate. My scale.

33. Which celebrity/public figure did you fancy the most?
Clearly, Mariska Hargitay.  ‘Fancy’ is a neat way to describe my unabashed adoration.

34. What political issue stirred you the most?
The fact that as the war in Iraq goes on and on and the economy continues to suffer, I may never get to see the environment become a campaign priority.

35. Who did you miss?
Rachel, after she dashed off to light up the lives of young leaders all over the world.  My dog.

36. Who was the best new person you met?
Amy, who I still believe is meant to be my friend even though extenuating circumstances keep postponing it.

37. Tell us a valuable life lesson you learned in 2008.
One in four women think they sweat more than the general population and I am one of those women.

38. Quote a song lyric that sums up your year.
“I don’t necessarily buy any key to the future or happiness, / But I need a little place in the sun sometimes.”—Moses, Patty Griffin 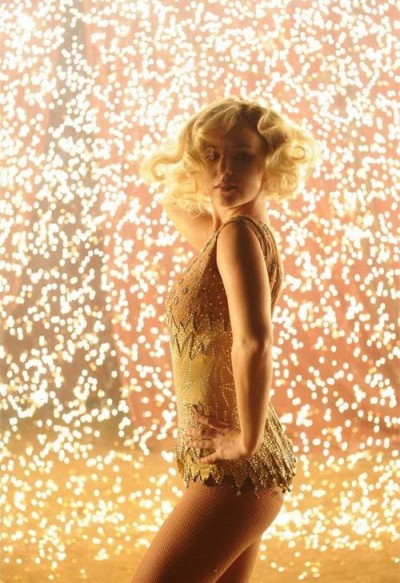 Circus by Britney Spears
I feel the adrenaline moving through my veins. / Spotlight on me and I’m ready to break.

As long as you’ve got my crazy, Britney, I’ve got your back!

This Town by O.A.R.
It’s better that we keep this close, / Keep you close to me. / Walking under every sky, / Over every sea. / You can be my modern girl, / And I can be the one you found.

But, Honestly by Foo Fighters
And all the words I gave to you, / Something borrowed, something blue, / If you want them back, / I’ll give it to you. 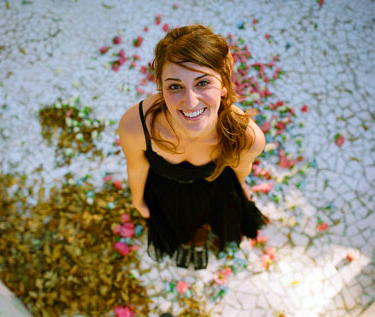 Many The Miles by Sara Bareilles (Live at The Fillmore)
I do what I can, wherever I end up, / To keep giving my good love.

Setting Forth by Eddie Vedder
This I will recall, / Every time I fall.

Live Your Life by T.I. (featuring Rhianna)
Some move away to make a way / not move away cause they afraid.

Mercy by Duffy
You got to understand that I need a man / Who can take my hand, yes I do.

She’s Like A Star by Taio Cruz
She’s my star, my light, starry night. / Aviator shades, ’cause she shine so bright.

My eight most-played of the year

Red by Sara Bareilles
I am fading in and out, / What are you gonna do save me now, / From all of this danger, you don’t know how, / And I’ll find my way out. 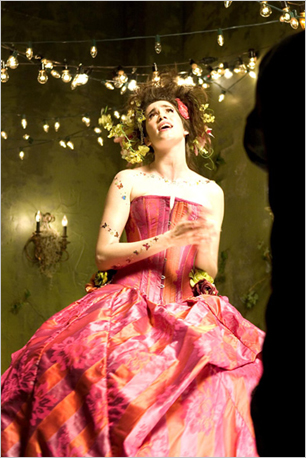 Hide and Seek by Imogen Heap
Oily marks appear on walls / Where pleasure moments hung before / The takeover, the sweeping insensitivity / Of this still life.

And So It Goes by Billy Joel
And this is why my eyes are closed, / It’s just as well for all I’ve seen. / And so it goes, and so it goes, / And you’re the only one who knows.

Always Midnight by Pat Monahan
A way to get back to you, / A way to get outta here. / I don’t want to be alone / At midnight anymore. 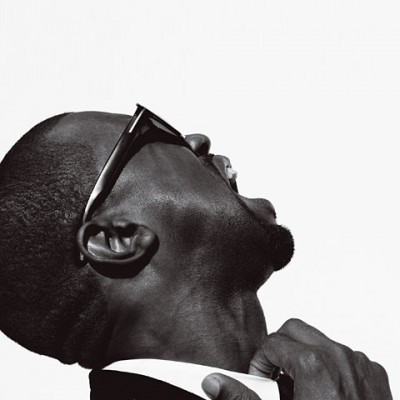 This Ain’t A Scene, It’s An Arms Race by Fall Out Boy (featuring Kanye West)
And I don’t really care which side wins / As long as the room keeps singing.

Just Like Heaven by Charlotte Martin (The Cure cover)
Spinning on that dizzy edge / I kissed his face, I kissed his head, / And dreamed of all the different ways / I had to make him glow. / “Why are you so far away?” he said, / “Oh, won’t you ever know that I’m in love with you?”

Party Generation by Dar Williams
It was the kind of party that you hope never ends / . . . There was a lot that you could learn if you lay near them, / Like if you listened you could hear them and he could hear them.

Tina Fey as herself

Last night I sat on the train next to a guy studying the pages of what must be the “textbook” for a taxi driving school.  It was a bound book of pages and pages of hotel, hospital, and museum addresses and mnemonics for figuring out where a particular street address falls between avenues.

Here I am, thinking I’m such a genius with the “traffic travels east on the even-numbered streets and west on the odd-numbered streets in Manhattan” rule (with seven exceptions, I think).  And I’m all impressed with myself when I inform my father that Penn Station and Grand Central are not, in fact, directly across the island from one another.  Haughty amateur!

I scored 66% on this Hack License NYC Taxi Test, and only because most of the questions concerned the geography of city parks.

I scheduled the last of my vacation days for 2008 today.  Yes, today.  On the first day of the last month of the year.

There are thirty-one days in December.  Eight of those days are weekends.  Five of them are company holidays.  Major seasonal meetings take up most of four of them.  Our department bonding activity is scheduled on another day.  That left twelve days eligible for the Vacation Day stamp.  Oh, and I was already in the office by the time I tried to sort this all out, so forget about December 1.

I have to take five of those eleven days off.  Am I going to get any actual work done before the end of the year?