Earlier this month, my mom and I went to a bridal shower together. We were one of several pairs of Mother & Daughter, but it was the first time I’ve ever attended an event with my mother and not felt like she was only present because I was or the other way around. She wasn’t there to be my chaperone. I wasn’t there because she didn’t have time to drop me off at home first. We received two separate invitations at our two separate homes and brought two separate gifts accompanied by two separate poems (the poems were Mom’s idea).

I’ve heard my mother called by her own name by other adults my whole life, but it totally threw me off to hear us introduced as “Emily” and “Elizabeth” and not “Emily and Elizabeth” or “Elizabeth and Emily.” The other guests kept talking to us like we were two separate entities, two separate people. Was it not clear that we were together? Maybe I should have pointed out that we arrived in the same car.

It was a bridal shower game that outed us as “Emily and Elizabeth,” unmistakably Mother and Daughter. Each guest dumped out her purse and tallied up its contents according to a list that gave a score for each item. Stamps, pens, mints, pain killers, lipstick, sunglasses, the keys to someone else’s house, and the like were all worth 5-25 points to the person hauling them around.

After taking inventory, we started scoring with a show of hands: “Who has 10 points? Who has 20? 30?” Hands started to drop as the total climbed past 70 points. Only four or five women had 100 points-worth of stuff in their bags. The last three standing were the bride’s grandmother, my mom, and me.

“Who has 130?” Grandmother-of-the-Bride lowered her fingers. A knowing groan rolled through the room as my mom and I stared each other down.

“Anybody have more than 140 points?” Mom couldn’t hack it. She dropped her arm as I raised my other one in victory, waving my winning item like a trophy.

My eyelash curler was worth 50 points and it was the only one at the party.

“You carry that with you everywhere?” Not even my own mother could believe it.

When we got in the car to go home—together!—my mom said, “I don’t know why I bothered to dump out my whole purse. I knew exactly what was in there.” I think I could have guessed the contents of my mother’s bag, myself. That’s where I get all my stamps.

My theory is, the same way my body craves proteins and vitamins when they’re lacking, I get cravings when there is an emotional or intellectual deficiency of some kind. I go through phases of fixation on one particular element of my life.

Material cravings have me browsing online and mail order catalogs like it’s my job.  Next, I’ll spend every free moment working out or planning a workout, my refrigerator is stocked with fresh, lean organics, and I get my hair cut and revamp my skincare regime.  Then I’ll read three books in two weeks and entertain the notion of going back to school for an advanced degree.  And when that passes, I sprout social butterfly wings and make a point to catch up with everyone I know before retreating into a domestic phase.  That usually involves a comprehensive scrub-down of the entire apartment and the rearrangement of furniture and decorative accessories.

Sometimes it leads to attempts at creating decorative accessories myself.  That’s a warning sign for a creative spell.  The creativity cravings are the most difficult to satisfy.  It’s like craving something, but not knowing what it is.  Because what I want, what I crave, is somewhere within me, unseen, and if it gets stuck, simply wanting it to emerge isn’t enough to make it happen.  Sometimes I feel just desperate to conceive something of words or colors and when I can’t draw it out, it’s like I’m imploding and exploding at the same time.

What’s unsettling is, lately, I haven’t craved much of anything.  It’s like I’m caught in the trough of a wave, just riding it out.  It’s odd, though, this absence of want.  It’s like a deficiency of deficiencies, but that doesn’t mean I’m thoroughly satisfied.

I was born in San Antonio, Texas in 1984.  A few months before my parents moved to Connecticut in 1986, my pediatrician relocated to a new office.  It featured a rainbow sculpture that arched across the sidewalk leading up to the front door.

The rainbow is my earliest memory; the first image imprinted permanently on my brain.  For literally as long as I’ve possessed the ability to remember, I’ve had the image of this rainbow in my head, a little hazy around the edges.  It’s what I’ve always contributed to conversations about San Antonio: “I remember a building with a rainbow in front of it . . . ”

But it was the one thing that we didn’t have a photograph to look at.

My coworkers, bless their hearts, brought me to the rainbow on the way to the airport after our conference in San Antonio last week. 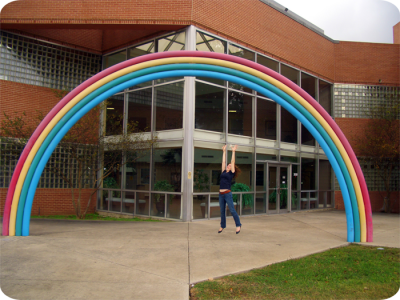 My parents had sent me the addresses of the hospital where I was born and of my first home, the names of a park where I split my little chin open and of a few Texan landmarks that we visited as a family, but all I really wanted to see was the rainbow.

I wanted to confirm that fading mental image with my own eyes.  It’s the one memory of my infancy that hasn’t been influenced by my parents’ memories, like the chin accident in the park, or reinforced throughout my childhood, like the rooms in my grandmother’s house, which is where the three of us lived when we first left Texas for Connecticut. 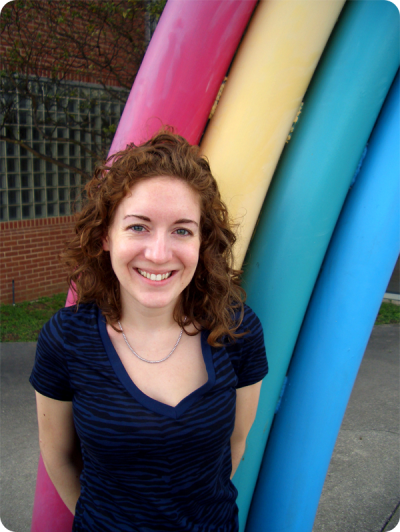 I felt a little homesick in San Antonio.  Without many concrete memories to represent it in my mind, I think of it as a place that I’ll always share with my mom and dad.  Before my brother or my dog or pre-school, it was just the three of us among the bluebells.

In a moment of ingenuity (that, or creative desperation), my parents affixed springs to the feet of two legs on my crib.  “We would have tried anything,” my mom explained after she revealed this for the first time, half-pleading for forgiveness from my astounded face.

Twenty-four years later, I know how I learned to rock myself to sleep just by jostling one knee until the repetitive motion carries the rest of my body along on a gentle sway.

Convenient, isn’t it, that childhood amnesia effect?  I wonder what else they’ve been keeping from me.

And I wonder where I could find springs large enough for the feet on my full-sized grown-up bed.

There are only three things that could get my parents to leave the house on a weeknight after the hour of 8PM:

A family emergency
A Doobie Brothers concert
A TimesTalks event

And so I will be spending Election Night with my mom and dad, Gail Collins, Bill Keller, Jill Abramson, and other members of the Times Editorial and Opinion teams.  I wonder how they’re planning to get us to leave at 10PM?  You know the results won’t be final by then.

My first question: Do I get to dress up?  I have a navy blue, semi-formal dress that would look just splendid in the red and blue light cast by the U.S. Electoral map!