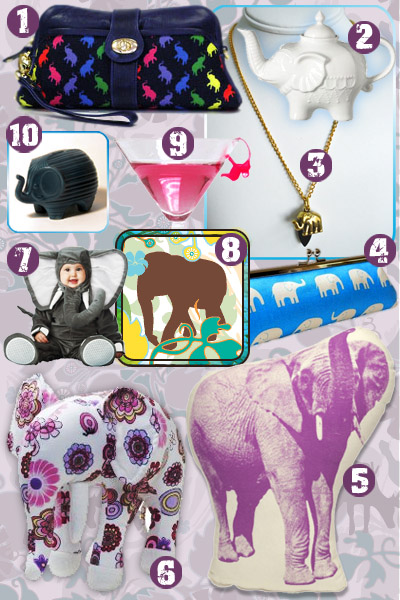 1. When I don’t have a whole trunk’s worth of stuff to carry, this little clutch will hold all my peanuts. Neon ‘Cleo’ bag by Jenny Yuen. $295 at the designer’s website or select NYC stores.

3. In the seventh grade, I wore a pewter elephant charm and a blue glass bead strung on black embroidery floss every day . . . until the thread frayed and finally broke. This model is bigger, kitschier, and a little more glamorous. $9 at the Etsy shop Spellkiss.

4. A cute clutch for the little things I don’t want to forget. $28 at the Etsy shop Cotton & Cloud.

5. Pico Elephant Pillow. Designed by Ross Meneuz for Fauna. 8″ x 9.5″ x 3″. Hand-printed on 100% cotton broadcloth using water-based ink. Made in Brooklyn. $28 at Design Public.  This is my favorite elephant.  It reminds me of a set of cat-shaped pillows my grandmother has had since I was a toddler, only hipper.

7. Does it come in my size? Lil’ Elephant Elite Collection Infant/Toddler Costume. Sizes 6 months to 2T. $39.99 at BuyCostumes.com.

8. Hanna’s award winning wallpaper comes in poster-form so there are no rolls to match up. She provides a formula for calculating how many posters will cover a specific wall. There are seven different patterns in the AnimalFlowers collection, including Elefantgräs. 150 Swedish kronor (about US$24) per poster; order by e-mail or shop in Europe.

10. Which came first; the piggy bank savings or the elephant bank from Jonathan Adler’s menagerie collection? In glossy slate blue or matte white. $78 at the designer’s website. (Let’s hope it was the savings.)

One thing I have tried to do in my apartment, both out of necessity and desire is decorate and accessorize with objects and images that look beautiful to me even if they aren’t high art.

This is the north wall-lette of my bedroom. It’s pretty narrow (the door is just to the right) and impeded by both the radiator and the light switch. It also gets a lot of sun through the three large windows on the front wall. 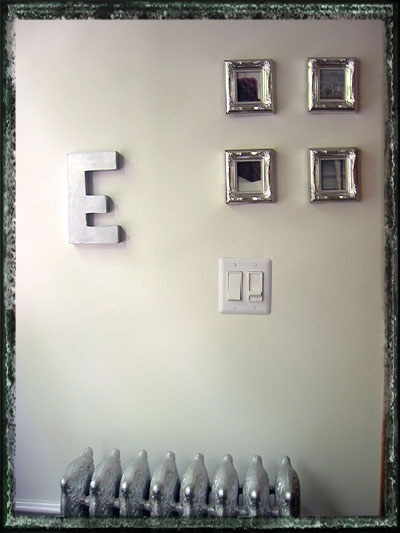 I didn’t want to hang a print here because it might fade from exposure. It would have been awkward to place one individual item with the light switch in the way of any symmetry.

The first thing I did was change out the switch plate. The gold one that was here when I moved in clashed with the silver coating on the radiator. I don’t think my landlord thinks himself an interior designer, but hello! That’s a catastrophic aesthetic error. I bought the matte white switch plate at Target or Home Depot for less than three dollars. I couldn’t have any distraction from the aged Victorian radiator.

The zinc letter E is from, yes, Anthropologie‘s monogram collection (8″ high, $18; 25″ high, $98). I staked out two different stores for two weeks until I found one with perfect texture imperfections. I really like the “drop-shadow” it casts on the wall in the early afternoon.

I got those four silver frames on clearance at Urban Outfitters last winter. They were meant to be magnetic, but the tiny disc magnets on the back had all popped either out or in leaving holes—which happened to be perfect for hanging on flathead nails. I think I spent about $10.82 on two sets of two. They are very lightweight and I wouldn’t want anybody from Antiques Roadshow to see how faux they look up close, but I love the baroque-y shape.

I’m really crazy about what’s in the frames, though, and this is where the “use whatever looks beautiful” philosophy comes in. I replaced the halftone portraits of Ghandi with images clipped out of catalogs. You can decorate more than the coffee table with junk mail!

On the left is a deep purple velvet tufted chair that I saw in an Urban Outfitters catalog. I cut it in two, so it’s pretty obvious what’s in the photo if you look at just the top half, but the bottom half is meaningless without it’s mate. On the right is a scrap from a J. Crew catalog. They did a photoshoot with lots of distressed furniture in a pristine living room, and one model posed beside this slender, white table with peeling paint and a chandelier on its side on the table top.

On their own, none of the framed clippings would mean much. Even as a set they don’t really convey a distinct message other than, “This is Emily’s aesthetic style, and since she can’t afford any upholstered furniture or a chandelier and she doesn’t have room for furniture that serves only one purpose, she decorates with pictures of all of those things.”

Is that so wrong?

I also sort of really love the egg shape of this locket: Oval locket pendant, $350.

Tiffany shows her tough side with the Return to Tiffany™ Heart tag in midnight-black titanium: Charm and bracelet, $450. Charm only, $100.

And lest you think I’ve lost my marbles six ways from Sunday, I can totally rationalize this one: Fifth Avenue charm. It’s in case I forget where I work! Chain and pendant, $160.

Build a dream (as in wildest dreams) bracelet with Tiffany Charms.

Visit the engagement store at your own risk.

I tend to have a visceral reaction against all things yellow. An over-reaction. It’s turned me off from neon highlighters, books with sickly sour jackets and athletic apparel with sporty yellow trim. My least favorite color is the compliment to two of my favorites, purple and navy, and all three are very ‘in’ at the moment, so I’m trying to keep an open mind. 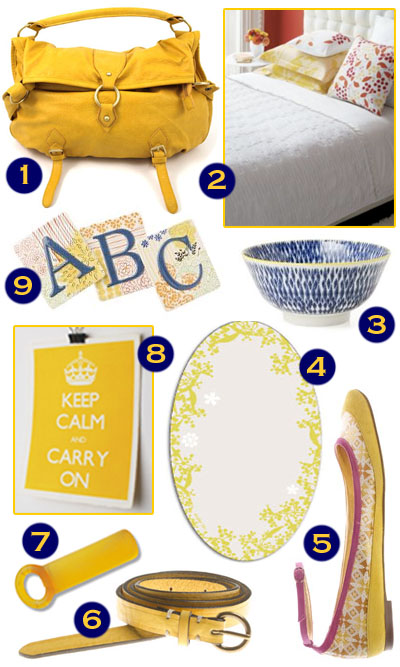 1. There’s no question, the Ranger Flapover Hobo Bag at Wrapables is yellow. The leather is fake, but soft, and the saturated hue will make a glowing impression. $40

2. The applique pillows in Vera Wang’s ‘Simply Vera’ line at Kohl’s look like vintage embroidered cushions. The palette is overtly pretty and only subliminally yellow. $35

3. Anthropologie’s navy-print River Delta Bowl has two surprises: a butterfly on the bottom and a bright yellow stripe around the rim. $12

4. One great thing about the color yellow is that it’s appropriate in almost any type of room and works as an accent to lots of different colors. The Ditsy Floral Screen-printed Mirror by Atelier LZC (at Bunny Maxwell) could go in a blue powder room, a green bedroom, or a red entryway. Even I’ll admit that it would brighten a visage with every glance. $55

6. For a low commitment punch, J. Crew’s Skinny Leather Belt in honey glaze is the tiny touch that turns an outfit into An Outfit. $29.50

7. I’m not too ‘yellow’ to try to open a tough jar, but a JarPop! (at The Container Store) might come in handy every once in awhile. $4

8. The Keep Calm, Carry On prints are inspired by a British campaign to bolster spirits during WWII. This sunshine yellow could help do the same. In BluLima’s Etsy shop. $12

This anti-bacterial foam is on promo at Bath and Body Works right now—$3 (usually $4). I fell so hard for the $1-off, I practically fell into the basket full of them at the register last week. 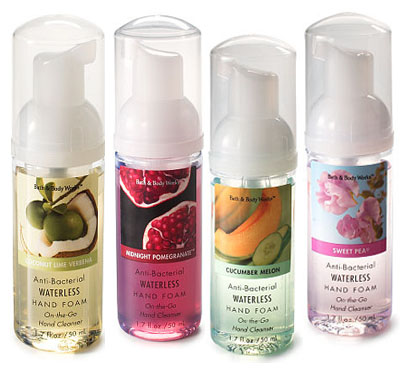 I’ve had Cocunut Lime Verbena in my bag since then and while it didn’t save me from the flu, it has kept my hands unexpectedly soft. And I’m really hoping that it’s keeping my roommate and my family safe from my contagion!