Introduction to Creative Writing met at one o’clock on Wednesdays.  I took a violet spiral-bound notebook to class.  On a lavender post-it that I stuck to the inside of the back cover, I wrote:

The only work that I have ever read by David Foster Wallace is the commencement speech in which he said those words.  The line was preceded by the following:

“As I’m sure you guys know by now, it is extremely difficult to stay alert and attentive, instead of getting hypnotized by the constant monologue inside your own head . . .”

That’s what depression is like.  A constant, hypnotic monologue damning each pleasure, every hope, any purpose and all courage.  It corrodes human resolve.  It bleeds out energy.  It’s paralyzing.  It will confine you to the inside of your own head and the only way out is to take back control over how and what you think.

It scared me that the Creative Writing course was one of the things that triggered such despair.  The possibility that deliberate writing, and the introspection and vulnerability that accompanies it, might always be so damaging was depressing enough.  I didn’t want it to be that way.  I really wanted to believe that, armed with philosophies like Wallace’s, I could cope my way past all the classic hazards of sensitivity, perception, and creativity, and get better.

To this day, I’ve never read a word by David Foster Wallace that wasn’t in his commencement speech.  At first, I abstained out of fear.  My depression was an imaginative and particularly superstitious monster.  I believed that reading Infinite Jest or Consider the Lobster would bring me closer to the author, but I also believed that if I got too close, I would break the spell.  I might threaten his control over his own thoughts.  And I might shatter any hopes I had for myself.

I’ve still not become a reader of David Foster Wallace’s work, and now I only wish there were some validity to my irrational fear.

The speech is archived at Marginalia.org.

I still have the post-it. 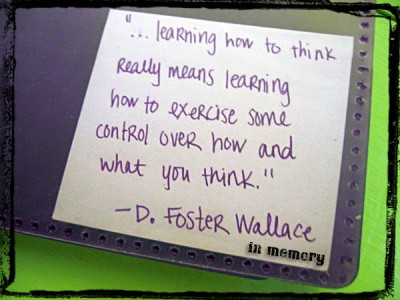 My mom has this thing that she says: “Love your guts.”

It’s the verbal expression of those moments when emphatic love flares up so brightly that you want to force someone between your ribs and squeeze them into your chest cavity to get them just that much closer to your beating heart.

It sounds a little gory, maybe even a little morbid.  But isn’t that just like love?

“It was just a two-sentence memo.”

I just can’t picture three German brutes behind the robbery of four Masterworks from a museum in Zurich last week. I imagine that the crooks were three slender French mice, hardly taller than the paintings themselves, wearing black and white gondolier’s suits.

They rode into the gallery on diminutive unicycles. Brie, the smallest, followed her brothers, Hamlin and Armand. Her wheel was rigged to a crank for her tail—she couldn’t quite reach the pedals with her feet.

Armand and Hamlin hopped from their unicycles, which clattered together in a heap. “Everybody to the floor!” cried Armand, revealing a pistol made of black licorice. He pointed the confection across the small gallery. The museum patrons and staff dropped to the ground.

Brie cranked herself to a stop and slipped to the floor. Ever so carefully, she tilted her unicycle against the piano in the center of the room. She patted the floral-print scarf tied round her sleek neck.

Using his bristly tail, Hamlin bounced up on to the brocade seat of a chair in one corner. From the little pocket in his cropped trousers, Hamlin produced a French harp.

“Armand; Brie! This one! And that one!” he cried, pointing at the paintings on either side of his post. He poised the harmonica beneath his wiry whiskers and began to hum out The Flight of the Bumblebee.

It was Armand’s cue to dash forward and reach out for a Cézanne; Boy in a Red Vest. He bumbled backward under the weight of the frame and he spent a moment hopping this way and that and juggling the painting before he could collect himself. He turned to look at Brie.

“Oh, all right,” she sighed. She wound up her tail, bounced herself upward, and plucked van Gogh’s Blossoming Chestnut Branches from its spot on the white wall of the gallery. Her picture was wider than her brother’s, but it was held in a more delicate frame. Still, it took all of her might for Brie to propel herself and the painting over to the glossy piano top, where descend on to her unicycle.

Armand was already pedaling around the room, narrowly missing the limbs of the anxious museum patrons fastened to the floor. He gripped his portrait under one matchstick arm. “Hamlin, we’re off!”

Hamlin hastened to conclude his recital and returned the harmonica to his pocket. He coiled up his hairless tail and heaved himself off the brocade chair, straight toward Count Lepic and his Daughters, a Degas portrait. In midair, Hamlin snatched the painting from the wall. He alighted to the floor as though bearing no enormous weight at all and scampered to his own unicycle.

Brie, now, was also cycling around the room, following Armand with a bit of a wobble. Hamlin fell in behind her. “Around again! Once again!” he commanded gleefully. The horizontal stripes did a little something to disguise his flat-chestedness. Brie wondered if it had perhaps gone to his head.

The trio began their final loop. Hamlin fished the harmonica from his pocket once more. He managed a grand finale of three thunderous notes with the instrument clamped between his jaws.

Boswell, the oldest and the very largest mouse, was waiting outside with a getaway car and a thick slice of cheese. He tossed his snack aside and threw open the van doors when he saw Armand and Brie racing down the walk.

“Where is Hamlin?” he cried as he pushed their unicycles and their spoils into the truck.

“Coming!” they heard Hamlin call. He had just emerged from the museum.

“What happened to you?” asked Brie as she draped her scarf over her glistening head and knotted it under her chin.

“I stopped for one more. Nabbed it with my tail.” Hamlin held up the Monet that had hung beside the gallery door, Poppies Near Vétheuil. Everybody paused to admire the impressionist landscape. Brie tilted her head to one side and squinted. Boswell stroked one of his whiskers.

“Eek!” shrieked Brie. She hopped into the passenger seat and popped on a pair of dark glasses. Boswell ran around to the driver’s seat. Hamlin and Armand hopped into the van and pulled the doors closed, taking good care not to slam their silken paws.

“Just go!” urged Hamlin. Boswell put both of his little feet on the gas pedal.

Together, they hummed The Flight of the Bumblebee as they drove the four paintings toward the city limits.

It was early October when I saw Peter and Jerry at the Second Stage Theater, and it closes tomorrow. But since the closing itself warranted mention in The New York Times weekend preview e-newsletter Urban Eye, it must not be too late to talk about it.

In 1958, Edward Albee wrote one act about two characters and called it The Zoo Story. Peter is a meekly stuffy upper-crust textbook editor from the Upper East Side. Jerry is a gregariously unsettled urban meanderer. He dwells in one room in a pitiful boarding house on the other side of town.

In 2004, Albee revisited Peter and Jerry. He put his characters, his script and his story into a time machine called Poetic License and went back to write a first scene. It serves as sort of an extended prologue to The Zoo Story. Peter and his wife tiptoe toward each other until they pounce violently on one horrific tidbit from Peter’s past, and then tiptoe away again. Peter retreats to the park to take a bit of buttoned-up refuge in his tightly-wound solitude. And there, he encounters Jerry, who unwinds the stagnant routine on which Peter depends.

I’ve read far more plays than I’ve watched and I think that has lead me to look at theater productions through a watching-from-the-wings sort of lens. I struggle to divorce the delivered dialogue from lines that were first printed in a script. I associate the performance with the writing process before considering the on-stage delivery. Sometimes it’s a challenge just to watch actors act without thinking of them as third-party messengers passing along the playwright’s text.

For this reason, Peter and Jerry was endlessly fascinating to me. There’s nothing I like better than a gimmick of artistic process.